Earlier this week I had a conversation with some friends about the recent New York Times story that detailed a US Government program which tracked UFO encounters with military personal.  The report was, to my knowledge, the first time any admission of this kind had been made by our government and even included videos of fighter pilots tracking some of these mysterious objects.  When I brought this story up with my friends, their reactions varied from mild curiosity to indifference, which is also the way this article was reported by the media.  For some reason this surprised me.

Maybe it’s because I watched the X-Files a lot as a kid, but doesn’t the possibility of “something” outside of our realm of understanding have significant implications on our lives and the way we see reality?  If we’re being visited by beings from another dimension or planet, does that re-frame our global politics?  Does the stress of our jobs or our course work seem less significant, or at least different, in light of cosmic events?  If there was something beyond our lives and our planet, would we change the way we live?

As someone who vocationally thinks about existential things, the UFO story caught my interest because it presented the opportunity, at least for a moment, to ponder our place in the cosmos in ways that were not compartmentalized to a particular tribe, party, or religion.

For most of us, we hardly have time to wonder about the big questions, and I would argue that wrestling with these things is not only a gift, but a fundamental part being human.  When we’re confronted by “something” from “somewhere”, we’re invited to do something that our culture is very much deprived of, to look up at the stars and marvel at it all – marvel at the infinite and the miracle of our simple existence.    In my study of us homo-sapiens, these questions are somewhat unique in our planet’s living taxonomies, and almost always lingering below the surface of our lives waiting for an opportunity to be uncovered.

I guess it’s not about Aliens for me, but rather the reminder they present, that we are, relatively speaking, incredibly finite when compared to what’s happening all around us all the time.  As Sagan reminded us, you don’t have to travel far from Earth to be humbled by the vastness of existence, that all of our problems and struggles exist on a “Pale Blue Dot”.

So, when was the last time you wondered at it all?

What if there was more to life than being a set of accidental atoms floating though endless space on a planet perfectly positioned for you to read this blog post?

What makes you ask the big questions?

But then again, this could just be a government plant to get us distracted from the new tax code………..

Only the cigarette smoking man knows. 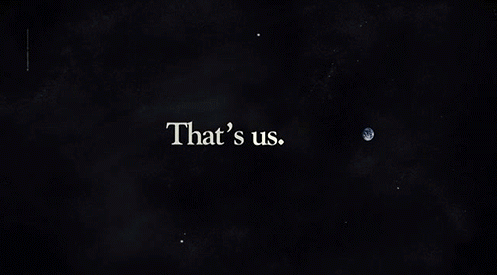