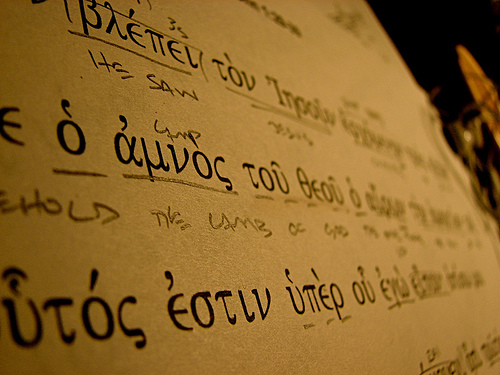 Last week at church our conversation revolved around the nature of that often misused and misunderstood collection of ink, pages, and bindings we’ve come to know as The Bible.

For many of us the Bible and the way it’s been used has sometimes drawn us deeper into our spiritual journeys, and other times has pushed us away.  Often our need to defend it has led to an anti-intellectualism, and other times our intellectualizing has sucked the spirit out of it.

So how should we approach the Bible?  What’s it’s purpose?  Can we trust it?  What is it?

Over the years of engagement with and study of The Bible, even in its original languages, I’ve become convinced that we’ve often missed its beauty, complexity, power, and depth.  We’ve often wanted to read the Bible with one lens instead of many, neglecting it’s diverse and complicated history.  To me, the more I learn about these dynamics, the richer the Bible becomes.

As we explored the Bible together I landed on a few sentences that may capture its essence and re-frame it in a new way for us:

“The Bible is the written and accumulated story of humanity’s engagement with the Divine, culminating in the incarnation of God in Jesus Christ and told through a particular middle eastern culture and compiled over time and in community.

It’s teachings are summarized in ‘love God and love your neighbor’, and it’s heart is summarized in the life, work, death, and resurrection of Jesus.

It’s mysterious and spiritual.  It’s a book that’s more than a book. ”

After considering some other ideas like “The Bible isn’t the word of God, it’s the word about the Word of God”, “The Bible isn’t a book, it’s a library”, and “The Bible though complicated in composition is simple in heart”, I closed my thoughts by sharing what the Bible has been and is becoming for me.

In my experience the Bible is a source of encounter with God that draws us into our collective human story in powerful ways.  It is a book that should be taken on our journeys as we wrestle with it, become inspired and encouraged by it, listen to it, question it, surrender to it, and consider its claims.  Ultimately it’s a collection of sacred texts that points us to the character of God, the self giving love that started all of reality.

The Bible is actually a collection of texts, a library  filled with ethnic origin stories, erotic poetry, accounts of mystical encounters, worship lyrics and prayers, biographies, personal letters, and apocalyptic visions.  Each of these books was written in a specific time, by specific people, in a specific genre, to specific people- yet somehow is also paradoxically universal in its scope.  The Bible is like a conversation between dozens of authors in different centuries, continents, and cultures that tell one story of God’s rescue through a radical minority Jew from an occupied territory.  It’s often best read in community and with a prayerful posture of listening.

Here are the some of the ways the Bible has played a role in my journey, and if you’d like to listen to a podcast where I explore these ideas further, feel free to click the link below.  Also, I linked a terrific book that might be a great further resource if you’re interested in re-exploring what the Bible is

What have been your experiences with the Bible?

Oak Life Reflection on what the Bible is

The Bible Tells Me So, Peter Enns