Like My last post, I read and reviewed this book as part of a licensing process at my work.  It’s been fun to read and critique some different authors and be enriched by their ideas.

What’s the last book you read?

How often do you disagree with teaching/writing?  How do you respond?

Got any good book recommendations?

I’m putting this review up before I turn it in to my supervisors.  If you happen to see a typo, or some huge error please let me know, it would be a huge help! 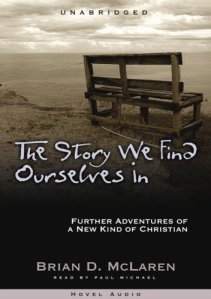 Over the past decade or so, author Brian McLaren has developed into a key figure in the development of what is becoming known as the “emergent church”.  His writings are filled with fresh vision for the church of tomorrow as he paints a picture of a new Christianity.  His books with titles like “A New Kind of Christian”, “A Generous Orthodoxy”, and “The Church in Emerging Culture”, have catapulted to the forefront of conversation how church is evolving and what will emerge in the next generations.  As a result, Brian’s questions, curiosities, and concerns have been seen as both encouraging and controversial to the larger Christian institutions.  While I am increasingly passionate about the need for the collective Church to progress, innovate, and change, I’m also weary of where the discussion might lead.  Brian McLaren’s book The Story We Find Ourselves In is a fictional story with a cast of some interesting characters finding their way through life, relationships, faith, and theology.  It offers a different technique at teaching pragmatic doctrines through conversation, story, and metaphor as opposed to bullet-points, creeds, and essays.  Even though I enjoyed reading the novel tremendously I found myself disagreeing with some of Brian’s underlying conclusions about God and the Church.

The title of the book draws its meaning from the idea that existence, reality, and life as we know it are in actuality a story of God’s heart, an unraveling towards an ultimate destination of hope and everlasting peace.  The main characters of the book revolve around the narrator, Dan, a pastor on the verge of some serious theological shifts.  The primary plotline focuses on Dan, Dan’s friend NEO – a Jamaican scholar / theologian / tour guide / mystic /pastor, and NEO’s friend Kerry who is terminally ill with cancer.  The story follows the cast as they experience love, relationships, faith, and death together.  Some of the significant turns in the narrative involve Kerry, a woman who has a calloused heart towards God, her rekindling faith, and inevitable death.  Through conversations with NEO in the Galapagos Islands, a place they met doing biological research, NEO explains the Christian gospel and worldview in a new, fresh way to Kerry, softening her heart to the possibility of God being real.  It’s through this conversation that the primary theological elements of the book are communicated.  NEO describes the story of God and humanity in chapters like creation, crisis, calling, conversation, and Christ.  Each of these chapters attempts to summarize, in NEO’s perspective, periods of Biblical history and ultimately the Christian gospel message.  This style of explanation through story is refreshing and overdue, however caution should be taken when speaking in absolutes about personal interpretations of scripture.

Personally, I resonate with the approach of sharing the grand story of the Bible, the metanarrative in theological terms, in a relevant and broad way.  This approach gets the main points across and communicates a deeper ideology and worldview.  In The Story We find Ourselves In, the primary points are that God created man, man walked away causing the world to persist in a broken state, God remained faithful through chosen people and eventually through incarnation in Jesus, and finally final restoration of the way God had originally intended reality, reconciled to Him.  Around these “main points” is drawn the foundation for the Christian worldview.

In current Christian culture I see this “main points approach” gaining in popularity. While on one hand it is good to re-tell the Gospel message in modern vernacular, I have two hesitations about leaning too much on just the metanarritive / story theology and where this approach may lead.  I specifically chose the word hesitation because when I think of hesitating I imagine some one moving forward with caution after some serious contemplation, and that is what I think Brian Mclarens take on theology sparked in me the most, hesitation.  If you were to jump off a cliff into a deep lake, you would probably hesitate and consider the depths, dangers, and consequences of the leap.  In the same way I think we need to hesitate with some of Brian’s addendums to Christianity.   I don’t think he’s wrong, but I don’t think his theology is complete either.  Let me explain:

When the scriptures are viewed as metaphor and not taken literally people tend to hold Bible teachings more loosely.  Everything becomes open-ended and literal truths can be brushed aside for popularist cultural trends.  A potential example of this is the current gay marriage debate.  On one side Christians can rationalize the legitimacy of gay marriage by explaining that the moral rules and precepts of the Bible are not literal or relevant to today’s world.  On the other hand Christians who take the scriptures at face value would argue that homosexuality is a sin, negating the reality of gay marriage.  This is a complex struggle in that if we are too liberal with our theology we may slide down the slippery slope and fall for any cultural trap of sin and destruction, but if we are too conservative we risk being judgmental and legalistic.  When it comes to how we hold the scriptures I believe we have to live somewhere in the middle, be both black and white as well as grey.  I believe this is the most honest way to approach the Bible, which is made up of both stories and documentaries.

In the book more favor is given to the open-ended view of scriptures.  NEO explains how the Bible is just one big story, overlooking whole sections of law and legality, which however ancient, still have practical basis and should be considered.  He also overlooks New Testament teachings about moral issues.  While I understand that the Bible IS in truth a story of God’s love for us, I also think that part of that story includes God giving us some specific hopes for how we live our life in the form of rules.  The truth is that both aspects are present in the Bible and to lean too far on story or legality could be an inaccurate interpretation

Much of NEO’s and Dan’s conversations about mainstream church were filled with frustration and complaining.  Indirectly Dan and NEO portrayed themselves as “enlightened individuals” leading a movement of awakening.  NEO spoke often of a “new way” implying that the old way was inherently wrong.  Overall their attitude towards the Church seemed arrogant, self righteous, and grandiose.  Their “authentic” experiences by default nullified the experiences of the larger Christian community who hadn’t yet “woken up” to this “new way”.  While I certainly don’t disregard their experience as significant and real I don’t think it’s new and I definitely don’t think it’s unique. The emergent perspective described above encourages Christians to look down at the Church’s that currently don’t experience God the way they do.   Again, I would argue that the emergent experience is not new, and not different than the experience of other Christians.  An in depth look at Christian history will see the “main points approach” and its implications as frequently discussed by theologians, pastors, and writers for centuries.  To me, it feels arrogant to suggest that they have discovered some new form of Christianity, when the truth is Christianity exists in a vast spectrum of doctrines, traditions, and beliefs.  This history should not be rebelled against but celebrated and utilized as a guiding force helping us understand the gravity of God.  The danger I see with labeling the emergents as new or unique is that it implies a level of throwing out the current establishment instead of understanding it and embracing all that it has to offer in order for us to bring the Gospel to this generation.  To completely rebel against our forefathers feels prideful and arrogant.  I am in no way suggestion that Brian has it all wrong, I just think his approach to the established church, that gave birth to our faith, should be one of gratitude and humility.  I fear books like these stoke the flame of rebellion in a culture already skeptical of “the man” in all his forms.

In simple terms I think the tension lies between being reformers or revolutionaries.  Some might think that the current times call for us to revolutionize the church while others may believe we need to reform it from the inside out.  As with hesitation #1, I think the real answer is both.  We need to revitalize static, plateaued Christians and churches and pioneer new expressions of Christianity in revolutionary fashion.  The danger lies in our heart, where we must always err on the side of gratitude and humility rather than arrogance and self-righteousness.

Overall I found the reading insightful and refreshing.  I enjoyed Brian’s storytelling and would even recommend the book to foster a basic understanding of Biblical timelines and how God works the lives of people through relationships and experience.  I found myself at times getting excited, encouraged, and proud to believe and have a role in The Story We find Ourselves in. One of the recurring themes that surfaced in my thoughts was the need for balance in theology.  Both of my hesitations to some of Brian’s idea’s were sparked by the reminder of how necessary balance and perspective are when discussing the truths of the Bible.  As a teacher / pastor to students and a young leader in a church, I have a feeling that this lesson will prove immensely valuable.