This is a post that I wrote a while back.  I thought it would be fun to remember how different I used to be, wow. 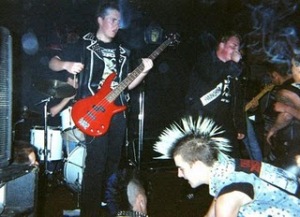 When I was younger I was involved in the local punk scene. I love reminiscing about it now because my behavior, logic, and rationale at the time were so warped. And it was so fun.  We drank, smoked, and engaged in lots of other rabble rousing activities expected from teenagers with too much free time, lots of questions about the world, and an upstart-idealistic outlook on life.  We even had our own band that played some pretty famous punk venues.  Those were fun, good times.  Fun, but empty. What started as youth striving to gain a voice in the vast mundane confusion of suburbia quickly evolved into reckless destructive behavior.   In the beginning of my immersion into  the punk way of life I was concerned with things like injustice in the world, bringing down capitalist greed, lashing out against prejudices and racism, and challenging pretty much everything about the way the world works.  By the end of my punk experience my passions shifted to things like getting drunk/high, having the right punk style (hair, pins, clothes, and taste in bands), and being more punk than the hot-topic kids.  It was the meaninglessness of these aspirations that were the catalyst for me to drop the leather jackets, charged hair, and F-you attitude.  My heart longed for something truly revolutionary, some sort of counter-world explanation of why the world sucks so bad.  It was this longing that drew me into the punk ethos, and eventually away from it.

Presently I work with kids at a church and for some reason we tend to attract youth with a similar disposition as I had when I was younger.  The disposition I’m talking about is the desire to change the world as we know it, to give the middle-finger to the system and all of its oppressive depravity, to rebel against our societies’ injustice.  When I come across students with this rebellious inkling part of my heart gets really excited.   And I just realized why.

Punk students get me excited because I believe God is punk.  I believe when God looks at our world and his church and how we his children are exploiting, raping, murdering, and oppressing one another he gets pissed off.  I believe that the idealism and punk spirit that questions our world and its institutions, including the church, is a perspective that resonates closely with Gods heart.  Jesus himself has often been called a revolutionary.  He up-rooted the very institution of established religion, He spoke out for the poor and marginalized,  and He gave his very life for his cause.

When I encounter students who are pissed at the world part of me gets excited because I think God is pissed about many of the same things, and its these thing that sucked me into punk, and later attracted me to Jesus.   Jesus’ upstart heart was passionate and boldly obsessed about bringing healing to the broken, turning greedy hearts into giving hearts, breaking the chains that hold down the oppressed and enslaved, deploying justice to those trapped in exploitation, and the downfall of pretty much everything else evil. To join in a movement like the one Jesus started a requires a certain boldness and courage.  This is boldness and courage I see in punk kids who can’t wait to change the world.  And its this why I love punk kids, because they have the heart that can really shake things up.  If these students realized that they share the same punk heart as God and joined in the counter-culture movement Jesus started they would be an unstoppable force for peace, justice, and love.

Do you agree/disagree?  Is this an example of taking shaping Jesus in light of our culture?  Aren’t you glad that our mistakes don’t own us and that we don’t have to be the people we once were?  Are there people you used to be, who?

BTW – I am in no way condoning some of the behavior I engaged in in that phase.  I feel lucky that I was spared from more significant damaging consequences from my decisions.  If you’re a student reading this – this is by no means an excuse to do dumb stuff, on the contrary, take it from me, the lifestyle glamorized by musicians and the media is empty, selfish, and can destroy you.  I consider myself so blessed that Jesus saved me when he did.